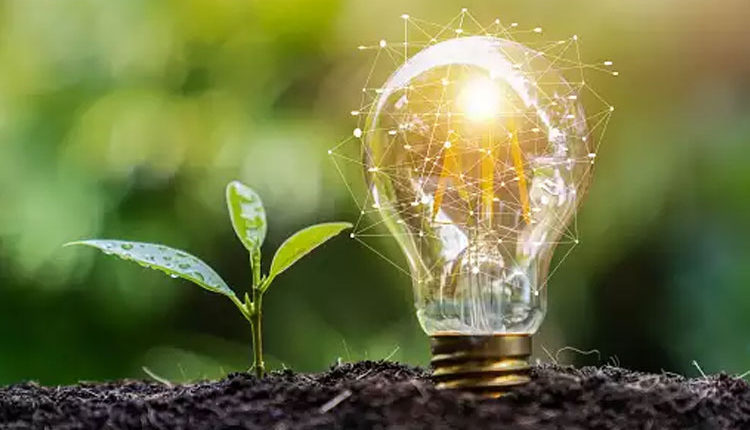 Most of the time energy is wasted in the environment directly or indirectly however if we can able to tap such sources or energy leakages, process and stored which can be either feed back to the system or utilised for some other efficient works. Energy harvesting systems typically convert ambient energy into electrical energy by means of transducers, which is then used to power up various devices, such as consumer electronics, implantable biosensors, wireless sensor nodes, and military equipment. They are primarily used in low-power electrical utilities, such as sensors, watches, and home appliances. These systems provide an efficient alternative to the use of conventional power sources, like batteries.

The energy harvesting system eliminates the need to have to replace batteries in devices, such as smartphones and laptops, by providing power sources that generate power from the device.

a. Develop of battery less devices and sensor
b. Optimise usage of power
c. Maximise the energy reutilising capability of systems
d. Increase the life of electronic devices

The growth of light energy harvesting is also attributed to the increasing number of companies involved in the production of solar products for building automation, consumer electronics, and security applications. Also, several companies are providing solar energy-based solutions for building automation and consumer electronics applications.
For instance, in July 2019, Samsung applied for clothing technology with a built-in energy harvesting device that gains power from solar light, solar heat, and body heat.

Energy harvesting from environmental vibrations has seen an increase in interest during the past years as part of the generally growing awareness for alternative energy sources. Next to the typical electro mechanical methods, ferro electric devices have proven to be very effective in harvesting energy for low power devices as often found in portable electronics, sensor-controlled and condition monitoring systems due to the wide usable frequency range, and adaptability.

In Thermal energy harvesting we capturing heat which is either freely available in the environment or waste energy given off by engines, machines and other sources and putting it to use. The thermoelectric energy harvesting system can generate power from hundreds of μW to mW for exciting different sensors and transmitters as per requirements

The Radio frequency energy harvesting is an energy conversion technique employed for converting energy from the electromagnetic (EM) field into the electrical domain (i.e., into voltages and currents). We have several design techniques, such as passive voltage boosting and impedance matching etc. where by we cab achieve energy harvesting. Depending on the power emitted by the source and the distance from the source (from 10’s of cm up to 10 m), typical power levels you can harvest range from 10μW to mWs 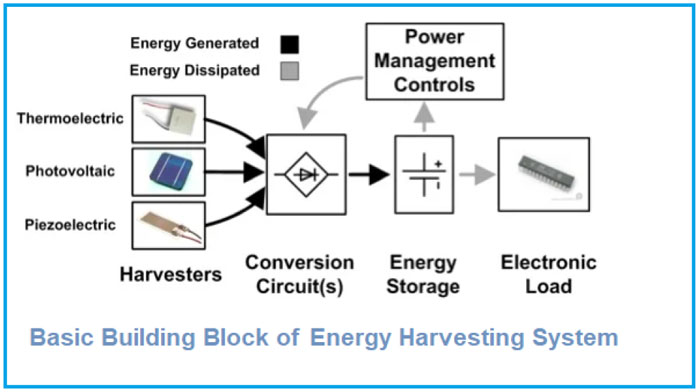 a) Energy harvesting for Industries and IIoT

Acceptability of Internet of Things (IoT) has grown tremendously worldwide, It has been estimated that by 2025, devices connected to the IoT network may exceed the figure of 75 billion units estimated traffic of 125 exabytes of data per day in 2025. Managing such huge data become the next challenges for IoT. However if sensible decision are taken by understanding the actual need of connecting the sensor or devices to the IoT systems rather than just connecting the sensor to IoT just because it is smart sensor may predictable optimised the capabilities of IoT systems and also bring efficiency reduces the challenges of scaling the system and many more.

b) Energy Harvesting for Automobile

In automobile the emergence of tire pressure management systems (TPMS) in automobiles has emphasized the need for energy harvesting systems as they can be used to power up the small electric components like sensors in it.

Also, the next generation electric vehicles more likely to focus on energy harvesting technologies to bring the high efficiency and maximise utilisation of energy, power, safety.

Energy harvesting systems are used in remote control units, where energy is harvested from the force applied by the user pressing the button. Recently, ARM has built such a device with the low power of the ARM Cortex-M0+ processor.

The energy harvesting in commercial and residential buildings. Electromagnetic (optical and radio frequency), kinetic, thermal and airflow-based energy sources are identified as potential energy sources within buildings and the available energy is measured and the sustainable system is designed for energy harvesting. The harvested power could either be used to replace batteries or to increase the life of rechargeable batteries for low-power (~1 mW) electronic devices.

As we know that a large portion of this energy is consumed by vehicles moving daily in cities, causing significant pollution of the environment. However, since the moving vehicle are the significant source of kinetic energy, which can be harvested by efficient usages of sensors, street lights, signals, etc.

Energy harvesting application to roadway pavements is mostly in demand since asphalt pavement is a huge storage of solar energy, the pavement energy harvesting technology promises a significant breakthrough in attaining renewable energy at a massive scale. The objective behind concerning higher power extraction is to supply power to auxiliary systems ( e.g road lights or panels) thus satisfying the requirement of sustainable transportation infrastructure.

The energy harvesting systems are the future, technology plays a key role in building such sustainable systems. The success of any technological solution based of efficient management and reutilisation of energy available for high performance and availability to increase the potential life of the entire system. The most promising advantage associated with energy harvesting is battery free, wireless sensor with cloud connectivity enables enhanced monitoring of environmental conditions in different applications such as data centres, industrial predictive maintenance, construction and power, cold chain, digital farming and smart healthcare.