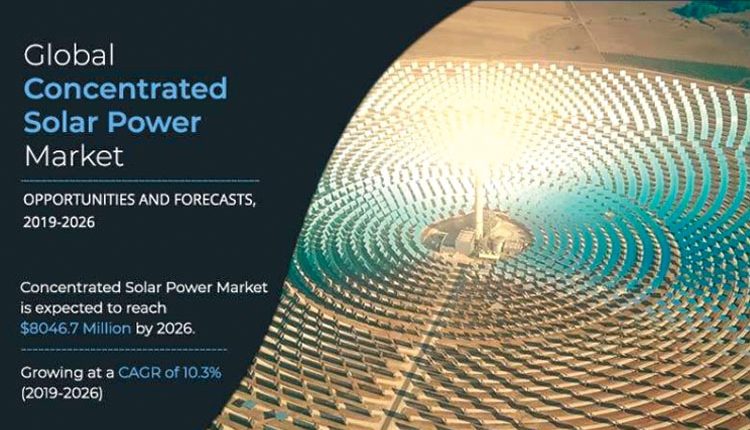 The Industrial segment of concentrated solar powers market is predicted to grow with a CAGR 10.6% during 2019-2026.

The Solar Power Tower segment is expected to grow with the highest CAGR in the global Concentrated Solar Power market size in terms of revenue, over the projected period.

Growth in environmental issues based on carbon emissions results in focus to decrease air pollution. This in turn raise demand for renewable energy such as solar energy. Thus, these factors are also anticipated to support the expansion of the market. However, high cost experienced during Concentrated Solar Power energy production restraints the market growth during the forecast period. Moreover, rise in investment from different industries in renewable sources provide lucrative opportunity for the concentrated solar power market growth.

On the basis of end user industry, the market is classified into residential, commercial, and industrial. Based on end use industry, the industrial segment is expected to grow with the highest CAGR during the forecast period.
Europe holds a dominant position in the global concentrated solar power market share and MEA is attributed to be the fastest growing region. The MEA region accounted for nearly 21.0% market share in 2018.

The Asia-Pacific concentrated solar power market offers lucrative opportunities for key manufacturers, owing to rapid installation capacity of solar energy to increase renewable generation. In addition, China is actively boosting the growth of the market to cope up with its severe pollution problems and develop its domestic manufacturing industry. Furthermore, availability of low labor has led to increase in energy production through concentrated solar power, which fuels the growth of the market.

CSP is generated in plants that utilize mirrors to focus the sun’s energy on panel to create electricity or drive traditional steam turbines or engines. The thermal energy focused in a CSP plant can be used and stored to produce electricity when needed. Growing government support to adopt renewable technologies is expected to boost the demand for concentrated solar power plant. Rise in energy demand & concentrated solar power capability to supply dispatchable power also drives the growth of the market.