Electronic Loads And Their Implications

Q. What is Leakage Current? 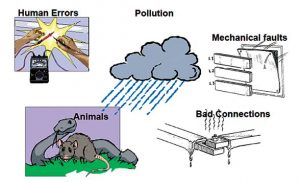 Q. Why is it important?

Electrical equipment commonly includes a grounding system to provide protection against a shock hazard if there is an insulation failure. The grounding system usually consists of a grounding conductor that bonds the equipment to the service ground (earth). If there is a catastrophic failure of the insulation between the hot (power) line and touchable conductive parts, the voltage is shunted to ground. The resulting current flow will cause a fuse to blow or trip a relay and open a circuit breaker; preventing a shock hazard. Obviously, a possible shock hazard exists if the grounding connection is interrupted, either intentionally or accidentally. The shock hazard may be greater than supposed because of the leakage currents. Even if there is no insulation failure, interruption of the leakage currents flowing through the ground conductor could pose a shock hazard to someone touching the ungrounded equipment and ground (or other grounded equipment) at the same time. This possibility is of much more concern in medical applications, where a patient may be the recipient of the shock. A fatal shock could result if the patient is in a weakened condition or unconscious, or if the leakage current is applied to internal organs through patient contacts. The double insulation provided in non-grounded equipment provides protection by using two separate layers of insulation. The protection in this case is ensured because both layers of insulation are unlikely to fail. However, the condition that produce leakage currents are still present, and must be considered. 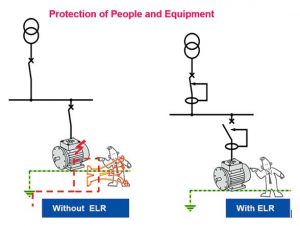 There are two types of leakage currents: ac leakage and dc leakage. Dc leakage current usually applies only to end-product equipment, not to power supplies. Ac leakage current is caused by a parallel combination of capacitance and dc resistance between a Voltage source (ac line) and the grounded conductive parts of the equipment. The leakage caused by the dc resistance usually is insignificant compared to the ac impedance of various parallel capacitances. The capacitance may be intentional (such as in EMI filter capacitors) or unintentional. Some examples of unintentional capacitances are spacings on printed wiring boards, insulations between semiconductors and grounded heat sinks, and the primary-to-secondary capacitance of isolating transformers within the power supply. Consequences Earth Leakage current beyond 30mA can be lethal leading to death. 30mA sensitivity is required for protection in domestic applications where the person may come in direct contact with electric equipment in locations such as labs, schools, workshops etc.100mA and 300mA protection is required where there is indirect contact or due to insulation failure in the cables.

Q. How is it measured?

A meter specially designed for measuring leakage currents is used. The current flowing in the ground conductor is measured by connecting the meter in series with the grounding connection. For information processing equipment, the ground connection is opened and the current flowing to the neutral side of the power line is measured. For medical equipment, the current flowing to ground is measured. The meter may also be connected between the outputs of the power supply and ground. The test conditions include swapping the ac line and neutral connections, and turning power switches off and on while monitoring the current. The test is performed after the equipment has warmed to normal operating temperature and, in some cases, following certain test that cause abnormally high temperatures within the equipment. The intent is to identify and measure the worst-case leakage current.For very low leakage currents, the meter is replaced with a network consisting of either a resistor or a resistor and capacitor combination. The voltage drop across the network is then measured using a sensitive ac voltmeter. Ungrounded or double-insulated equipment is checked by connecting the meter between any touchable conductive part and ground. In the case of non-conductive housings, a copper foil of a specific size is placed on the housing, and the current flowing from it to ground is measured.

Q. How can you get your equipments protected from Leakage Currents?

So how can you get your equipments protected from the leakage currents or how can you eliminate the effects of leakage current? Quantify the leakage current and then identify the source. One best way of going about this is to use Earth Leakage Relay (ELR). The Earth Leakage Relay with Core Balanced Current transformer provides protection from earth leakage with advance intimation (Pre-alarm) of impending occurrence of the event. The user can proactively take action to avoid occurrence of any mishaps. Rishabh’s ELR with 4 digit 7 segment LED display with True RMS measurement (as per IEC 60947-2 Annex M) provides the user with benefits that go the extra mile. Rishabh’s ELR is a microcontroller based device designed to measure low level of leakage current and isolate the faulty equipment or circuit from the system. Leakage current is sensed through Rishabh’s Core Balanced Current Transformer. Fixed time trip occurs when Earth Leakage Current exceeds the trip time which is programmable by means of front keys provide on the front panel of the relay or PRKAB software (can be provided optionally with Rishabh’s ELR). The user can program the threshold level ranging from 30mA to 30A. In case of earth leakage the LED indicators will glow depending upon the percentage of programmed threshold value. For e.g. If the set level is 30mA and the leakage current is more than 15mA then green LED will start blinking which will provide a visual alert to the user. This empowers the user to take corrective actions before any accident. Core Balanced Current Transformer (CBCT) uses the technology of residual magnetic flux. All conductors to be protected shall pass through the core balance current transformer. The vector sum of all the currents should be equal to zero. 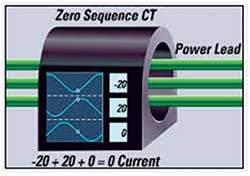 In case an earth leakage occurs, the zero- sequence fault current which flows is not cancelled by the flux of the other two phases and hence induces current (residual current) in the secondary. The core balance current transformer can be connected to an earth fault / leakage relay which can be used to generate the tripping signal. CBCTs are manufactured with one core and one secondary winding. The number of secondary turns does not need to be related to the cable/feeder rated current because no secondary current would flow under normal balanced conditions. This allows the number of secondary turns to be chosen such as to optimize the effective primary pick up current. The choice of ratio should therefore be left to the manufacturer to obtain the best possible results.

If more than one 3-phase cable are used in parallel, it is recommended that a separate CBCT on each cable be connected across a common relay or a separate relay be provided for each CBCT. The cable on which the CBCT is mounted acts as the primary conductor of the CBCT. Under normal operating conditions, the three line currents are almost 120 degree apart and balance each other. The resultant secondary current is zero. Upon occurrence of an earth fault, the faulted phase is the only one experiencing earth fault current in the primary. The maximum value of current is decided by the system earthing conditions. The CT wires should be placed adequately away from high current carrying conductors or source of strong magnetic field to avoid noise pickup.

Customer shall provide following information while ordering a CBCT :-