When every tenth of a second counts. 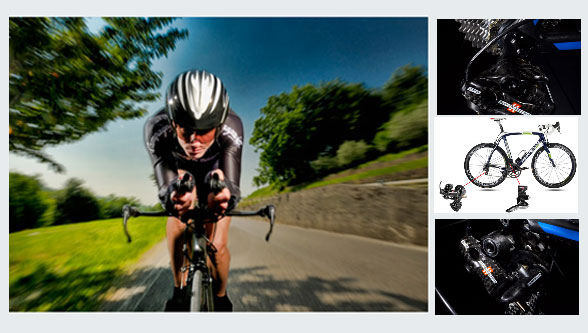 riathlon and time trial racing are gaining more and more fans every day. Technological innovations, such as an electronic drivetrain, are highly sought-after components when every second counts on the way to the finish line. The EPS (electronic power shift) system of bicycle component manufacturer Campagnolo from Italy took many years to develop. maxon motors are responsible for executing shifting processes within tenths of a second.

3282 kilometers in three weeks – that is the Vuelta a España, one of the three “Grand Tours” in cycling and, after the Tour de France and the Giro d’Italia, the most important stage race in the world. Winner Alberto Contador (STB) was followed across the finish line by fellow Spaniard Alejandro Valverde of Team Movistar, securing himself a place on the podium. This success was achieved with an electronic drivetrain of Campagnolo. But, the development road was long.

The Italian company started the project aimed at developing an electronic drivetrain in 1992. The history of Campagnolo’s electronic drivetrain, which today is called Campagnolo EPS (Electronic Power Shift) was a trip with six stages. Six planning phases,  with each phase resulting in important innovations, direction changes and great challenges. The collaboration with maxon commenced in 1994. Three years later, the first solution for a shift mechanism with a maxon was born. After several redesigns of the shift mechanism, derailleur and encoder, as well as modifications to the bicycle itself, the engineers of Campagnolo Campy Tech Lab™ had no other choice but to develop a completely new design for the shifting group. The main reason being the switch from a 10-speed to an 11-speed shift system.

In November 2011, the EPS Electronic Power Shift was finally successfully introduced to the market. This system consists of a rechargeable battery, electronics, shift lever, wiring and drive mechanism. The maxon motors are used at the rear shift mechanism (see video 1) and at the front derailleur (see video 2). The derailleur was completely redesigned to make it suitable for modern frames. The motors were adapted as well. To achieve the required maximum precision with minimum tolerances, the focus was placed on miniaturizing the rear derailleur and finetuning the electronic calibration. With the electronic shift system, a very high shifting accuracy, a high speed of response and the required power are achieved. This makes faster shifting procedures possible and the position of the derailleur can be adjusted with higher accuracy than is the case with a mechanical system. Switching from the smallest to the largest sprocket requires just a single click at the shift lever. To be more precise, the electronic shift mechanism can shift through eleven gears in only 1.5 seconds.

High-precision maxon motors for accurate shifting
The motors are the core of the shift system – they move the derailleur and the shift mechanism of the racing bicycle. The requirements on the brushed maxon DC motors were, on the one hand, that they had to be small, yet, on the other hand, they had to be strong enough to provide peak power. For the EPS electronic shift system, customized RE motors and gearheads are used. For the shift mechanism (at the rear), a motor with a single-stage, integrated gearhead is used. “The maxon technology offers solutions that easily withstands the extreme ambient conditions encountered on racing bikes and, in combination with the extremely good performance of the small RE motors, the electronic shift system is unique on the market,” explains Marco Campagna, Group Product & Marketing Manager at Campagnolo. Only nine months after the introduction of the electronic Super Record EPS and Record EPS drivetrain systems, Campagnolo already released the Athena EPS drivetrain. It features the same functions, but the components are largely made of aluminum.

EPCOS fulfills all requirements of the BIS for AC motor capacitors