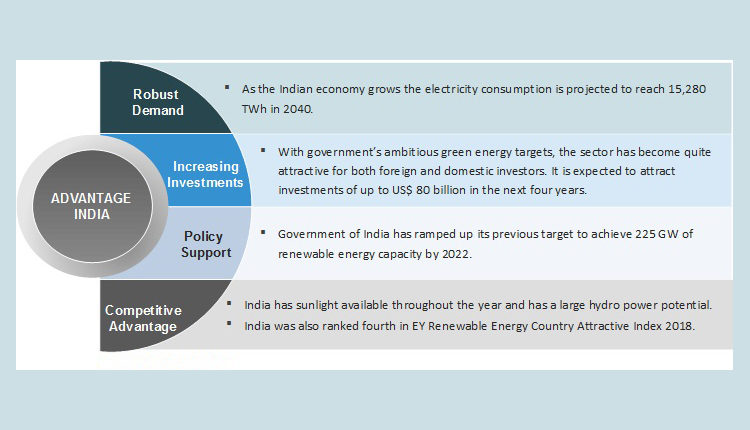 Installed renewable power generation capacity has increased at a fast pace over the past few years, posting a CAGR of 19.78 per cent between FY14–18. The focus of Government of India has shifted to clean energy after it ratified the Paris Agreement. With the increased support of government and improved economics, the sector has become attractive from investors perspective. As India looks to meet its energy demand on its own, which is expected to reach 15,820 TWh by 2040, renewable energy is set to play an important role.

According to data released by the Department for Promotion of Industry and Internal Trade (DPIIT), FDI inflows in the Indian non-conventional energy sector between April 2000 and March 2019 stood at US$ 7.83 billion. More than US$ 42 billion has been invested in India’s renewable energy sector since 2014. New investments in clean energy in the country reached US$ 11.1 billion in 2018.

Some major investments and developments in the Indian renewable energy sector are as follows:

Some initiatives by the Government of India to boost the Indian renewable energy sector are as follows:

Achievements in the sector

The Government of India is committed to increased use of clean energy sources and is already undertaking various large-scale sustainable power projects and promoting green energy heavily. In addition, renewable energy has the potential to create many employment opportunities at all levels, especially in rural areas. The Ministry of New and Renewable Energy (MNRE) has set an ambitious target to set up renewable energy capacities to the tune of 175 GW by 2022 of which about 100 GW is planned for solar, 60 for wind and other for hydro, bio among other. As of June 2018, Government of India is aiming to achieve 225 GW of renewable energy capacity by 2022, much ahead of its target of 175 GW as per the Paris Agreement. India’s renewable energy sector is expected to attract investments of up to US$ 80 billion in the next four years.

It is expected that by the year 2040, around 49 per cent of the total electricity will be generated by the renewable energy, as more efficient batteries will be used to store electricity which will further cut the solar energy cost by 66 per cent as compared to the current cost.* Use of renewables in place of coal will save India Rs 54,000 crore (US$ 8.43 billion) annually.

Note: 1- According to Renewable Energy Country Attractiveness index 2018 by EY;
2- As per data from the Economic Survey;
3- As per the Confederation of Indian Industry’s (CII) report titled ‘State Renewable Energy Policies: A Comparative Study’ ;*According to the Bloomberg New Energy Outlook 2017; ** Data from Venture Intelligence;
4 – as per Greentech Media;
5 – Greenpeace India