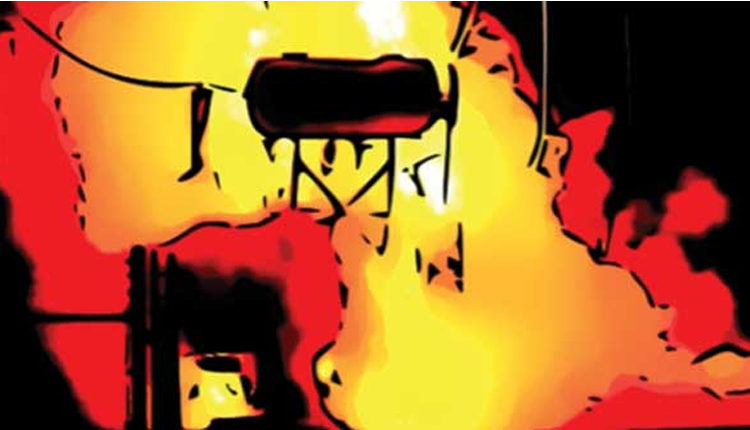 In simple terms Insulation is nothing but a material which opposes the flow of current. Technically, it contains almost negligible free electrons for the flow of current. There are different types of Insulation material present on Earth which can be classified as Solid (Ceramic, Glass, plastic), Liquid (mineral oil, castor oil) & Gaseous (SF6, Air, etc).
The insulation material is classified according to the temperature’s which they can sustain and not breakdown, take a look in table below as per IEC 60085.

This evokes us with a thought that why do we need insulation? So let’s have a look

The first and basic need of insulation is to provide safety to the human beings and to the circuits in the instruments. In any electrical equipment, the current has to flow along designated conducting pathways (called conductors), Insulation prevents currents from taking other unintended path. Insulation has got the inherent high electrical resistance property which does not allow contact with live circuits and hence ensures safety also Maintain the voltage at the terminals of the load, Avoid arcing to a different voltage or earth, Avoid electrocution. Hence all electrical equipment’s are manufactured by using insulation materials of proper grade in its construction.

So now it’s evident that how important insulation is! Taking this ahead and as we wrote that every electrical/electronic equipment has some kind of insulation over it, leaves us with a question whether insulation degrades and if it degrades, then what will happen if this degradation goes undetected……? let’s discover…

First we will see, why does insulation degrades! we as human beings, as our age increases we get affected with several diseases, our body starts degrading and similar is with insulation. As its continuously exposed to different conditions the degradation in insulation takes place. Let’s see the various reasons of insulation degradation:

Different types of stress lead to degradation in Insulation

No! No! don’t worry the intention is not to scare you but just to make you understand what can happen if Insulation resistance testing is not done periodically, all of a sudden you can get horrible surprises like the one in image above.

Let’s have a look at the criticality of Insulation resistance testing how it can be useful at different times of testing!

So far we have understood that testing of Insulation resistance periodically is of outmost importance. Now we move on towards the different procedures, methods, various ways that would help us in assessing the quality of insulation. 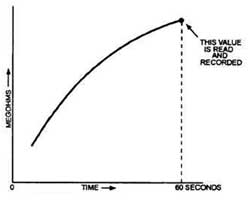 The most basic test for insulation resistance testing is Spot Insulation test. It suggests the application of test voltage for 1 minute and then note the value of Insulation Resistance. Note when your devices have a very small capacitance then spot test will be all what you need. But mostly equipment’s are capacitive so spot insulation test is an indicator of how good or bad insulation is!

Whenever a Device under Test is subjected to insulation testing and if its highly capacitive in nature then, three types of current flows through the insulation which are:

The initial burst of current that occurs when voltage is first applied to a conductor is called capacitive current. Like the first rush of water flowing through a hose, it typically starts out high and then drops quickly once the conductor is fully charged.

As we discussed that most of the devices are capacitive so spot test is just an indicative of good or bad insulation. However, we have further tests which are also called as diagnostic test to have a detail analysis of quality of insulation.

The PI (Polarisation Index) measures the time required for molecules of insulation to polarize to resist the flow of current. For testing high capacitance systems such as large motors, generators, or apparatus with complex insulation systems. Steady readings are only possible after the time-dependent currents have almost died down.

PI Test measures the ratio between insulation resistance readings taken at one minute and ten minutes after the application of voltage to judge the rate of disappearance of capacitance and absorption currents.

Dielectric absorption ratio is the ratio between insulation resistance readings taken at 30 seconds and 1 minute after the application of voltage to judge the rate of disappearance of capacitance and absorption currents.

Step voltage test is basically applying the different test voltages in steps for fixed duration of time to check the behavior of Insulation at different test voltages. As per standard generally the variation of insulation resistance between consecutive readings should not be greater than 25% if it is observed beyond 25% then there is some problem with the quality of insulation. Nowadays more popular test is the Ramp test where instead of in discrete steps, voltages are gradually increased and the leakage current is graphed continuously against voltage rise. Normally, the relationship is expected to be linear, but if current begins to rise more sharply, the material is breaking down and the test can be terminated prior to the occurrence of full breakdown. The Ramp Test has been evaluated by standards agencies, and is described in IEEE 95-2002. The evaluation of test results first prescribes that insulation in good condition should produce a smooth, almost linear rising current curve against the applied voltage. Any deviation should be viewed as a warning that the test could be approaching a possible breakdown. A sudden increase in current usually indicates imminent breakdown, and it has been possible to approach as closely as 5% below breakdown voltage.

Thus we have seen different diagnostic test which can be performed to evaluate the quality of installed insulation on any electrical equipment & how these different test methods would be useful to assess the insulation health. 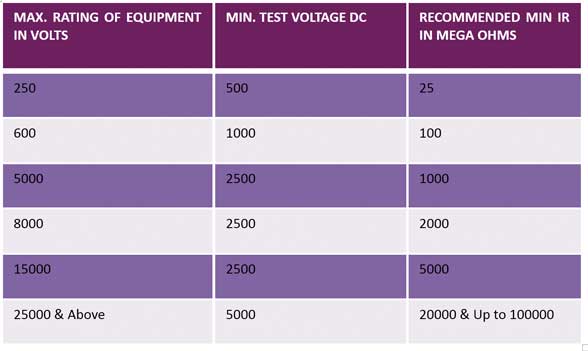 THE RECOMMENDED MIN IR VALUE (Rm) FOR
Field windings can be determined as
Rm = kV + 1 (M Ohm)
Where,
Rm = Recommended Minimum Insulation in MΏ at 40°C

Recommended minimum insulation resistance for winding to ground with other windings guarded, or from winding to winding with core guarded.