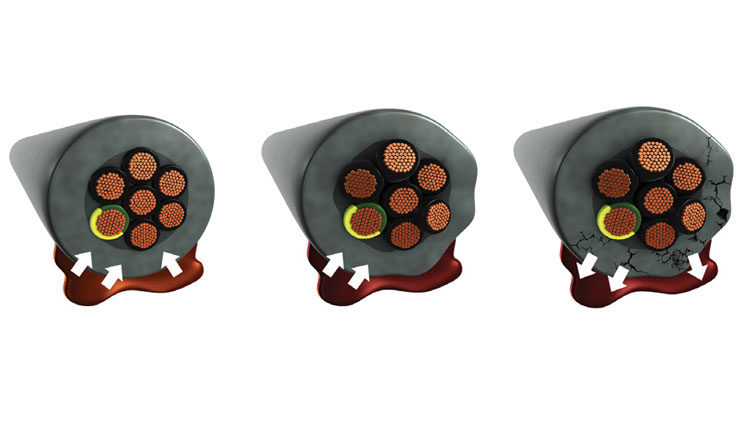 Read this article to learn how oil degrades cables, how to diagnose oil exposure problems and how to select cables that can stand up to oils over the long haul

Of all the chemical exposures that can affect the life and performance of electrical cables, oil is one of the most damaging. Used as a coolant and lubricant in many industrial and infrastructure settings, oil can inflict molecular damage on the polymers used for cable insulation and jacketing. If ignored, oil damage to cables can be severe. It will ultimately result in cable failure, downtime and replacement costs.

Awareness of oil damage has been on the upswing in recent years, thanks to regulatory changes and the increased performance characteristics in renewable energy, automotive assembly and other advanced production facilities. Fortunately, there are cables that have been designed from the ground up to resist the effects of cooling and lubricating oils. Here’s a closer look at how oil degrades cables, how to diagnose oil exposure problems and how to select cables that can stand up to oils over the long haul.

1 Cracking – Caused during exposure of the PVC to oil or other chemicals due
the complete removal of plasticizers, resulting in hardening and eventual cracking of the insulation and jacket.

2 Melting – Caused during exposure of the PVC to oil or other chemicals due to the absorption and combination with the plasticizer, resulting in softening and the high elasticity noted in the compound.

3 Swelling – Caused during exposure of the PVC to oil or other chemicals due to migration of the oils into the plasticizer, resulting in noticeable increases in insulation and jacket diameter.

4 Discoloring – Caused during the exposure of the PVC to oil or other chemicals due to the diffusion of the plasticizers along with colorant from the insulation and jacket.

Why does oil cause such excessive damage on some types of insulations and jackets, while others are more resistant? The main reason is that not all polymer compounds offer equivalent performance even if they have the same family name. This is true for many physical properties, including oil resistance. For example, some PVC compounds have a higher degree of flame resistance, while others have better oil resistance. Still others demonstrate improved flexibility characteristics. PVC formulations vary greatly, depending on the desired properties and applications. These properties can be achieved by adjusting the formulations of a particular PVC compound. The modification or addition of flame-retardants (iodine), stabilizers, and fillers allow the compound to exhibit these types of enhanced characteristics. However, when certain PVC characteristics are improved, the enhancement sometimes comes at a cost, the cost being that other performance traits are affected or completely lost.

With oil resistance in particular, all wire and cable insulations are not created equal. Electrical, environmental, mechanical, and chemical attributes will vary depending upon the individual compound formulations. Insulating compounds contain a specific amount of plasticizers in their individual formulations, which help promote flexibility and resistance to fatigue. When compounds are exposed to lubricating and coolant processing oils the material either absorbs the oil or the plasticizer will diffuse from the compound.

When oil is absorbed, it causes severe swelling and softening of the compound resulting in degradation of tensile properties. When the oil causes diffusion of the compound plasticizer, hardening will result and all flexibility and elongation properties are lost.

In short, oil attacks the insulating compound, where it will become virtually ineffective in its primary role as an effective insulator. This action can create a possibly very hazardous situation, not only to human life, but also to the overall function of the industrial machinery to which it is connected. This results in very expensive downtime, costly repair and in the worst-case scenario, entire replacement of the machine

And oil exposures don’t just happen in factories but also in infrastructure applications. In wind turbines, for example, cables high up in the nacelle can potentially see constant exposure to lubricating and cooling oils for very long periods of time. Temperature extremes and other chemical exposures can exacerbate the damage caused by oils. Wind turbines applications, for example, subject cables not just to oils but also to temperature extremes. Oil rarely makes up the sole threat to cables. Instead, it works in concert with other degradation mechanisms, including temperature. In general, the greater the intensity of the oil exposure and ambient temperatures, the faster oil will start the deterioration process.

Once it gets underway, oil damage is not reversible. But it can be prevented by selecting cables with inherent oil resistance. Without a deep knowledge of the specific polymer compounds used in the cable you’re considering, it can be difficult to know which products can stand up to oils. And that’s why testing is so important. To avoid oil resistance problems, engineers should pay close attention to UL tests, which help determine how a cable will react in the industrial oil environment.

These tests are more commonly referred to as the Oil Res I and Oil Res II tests, which involve continuous immersion of the cable samples in IRM 902 Oil at elevated temperatures for a specified period of time. Passing results are determined by the evaluation of mechanical properties and observations of physical damage caused by the oil exposure. In 2000, Lapp approached UL about creating tougher standards which resulted in the creation of AWM style 21098, which takes oil resistance to a new level. The oil resistance of cables has now become a critical performance parameter when electrical contractors, engineers, and installers specify cables. As time moves forward, superior oil resistant cables will become standard, rather than the exception.